wifi in Sligo? Never heard of it

I have sooo much to share with you, and I'm having a hell of a time connecting to wifi anywhere in this town. There is something to be said for it. It's forcing me to disconnect. However, those of you who've emailed me, I apologize for not responding. Very difficult to check my email.

Hopefully I'll be able to write a nice long post about Sligo once I get to Galway tomorrow. Pics included. Xo
Posted by S. Walden at 4:49 AM No comments:

I promised you a short history of "The Troubles" along with lots of pics yesterday, but I'm finding that it's nearly impossible to blog. I simply haven't got the time! There's too much to see, too much to do, and it's overwhelming. But overwhelming in a good way.

We're rounding out our stay in Derry, Northern Ireland, today with a tour of the Free Derry Museum and the Apprentice Boys Hall (I was told to get a helping of both sides of the conflict...you know, to be fair). So here's the short version of what's going on up here:

The island is made up of Northern Ireland (part of the United Kingdom) and the Republic of Ireland (free, self-governing state).

1960s through the 1990s in Derry--lots of fighting between Catholics (predominantly Nationalists, meaning they want a united Ireland) and Loyalists (predominantly Protestants, who want to remain under English rule). Bombings and shootings became an everyday reality for the residents of Derry. Catholic and Protestant neighborhoods were divided by "peace walls" to ease tensions. The River Foyle (cutting through the town) also served as a natural division between these two groups. It's peace time now, and Derry was even chosen as Europe's City of Culture for 2013. But as Aidan and I walked the city and talked with locals, we learned that "peace" is a relative term. The residents still aren't ready to tear down the peace wall surrounding the only Protestant neighborhood in the city center. There is definitely a tangible movement towards peace, but it's slow moving. Here are pictures to help you understand the conflict: 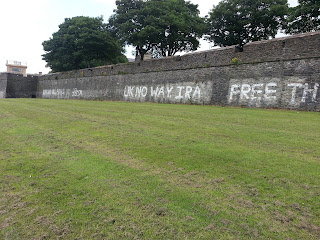 (This wall which overlooks the Bogside, a Catholic neighborhood, says it plainly:
"UK No Way. IRA") 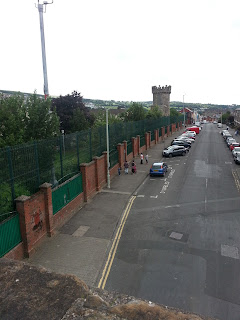 (Peace wall segmenting the only Protestant neighborhood left in the city center. The city center is mainly Catholic. Residents say they're ready for it to be torn down....eventually. Not today.) 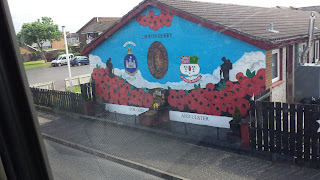 (Loyalist mural in a Prostestant neighborhood across the river. The bottom reads "For God and Ulster.") 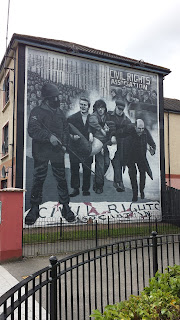 (Mural of civil rights march in 1972 where British troops opened fired on unarmed civilians killing 14. The first victim is seen being carried to safety while a priest waves a white flag. This is the event sung about in U2's "Bloody Sunday.")
The reason I've done so much research into the political unrest in Derry is because my hero's family is from Derry. The events of Bloody Sunday play a key role in his upbringing and overall character development.
Off to Sligo today where my heroine's grandfather owns a small farm in the countryside. Sligo is "Yeats Country," and in addition to researching and familiarizing myself with the city center, I plan to take Aidan to many sites featured in Yeats' poetry: Benbulben, Glencar Waterfall, Connemara, Innisfree, and his gravesite at Drumcliffe church. More pictures to come.

I know you want pics. And I have them...lots of them. Unfortunately, I'm typing this message to you from a computer in the study at the B&B we're staying at because my laptop is corrupted. Yeah. It decided to "corrupt" on me at the beginning of my journey. So...you'll get even more posts: ones like this that contain a bunch of words and short, snappy posts that just contain pics and captions (from my husband's phone).

Okay, why am I here? I'm researching for my next book series: a three-part story about an American heroine who travels to County Sligo the summer before her senior year of college. She goes there to clean out her grandfather's estate (a small farm he left to her in his will). She meets our hero who's singular purpose in life has nothing to do with falling in love with her (she has different plans) :) He's more interested in revenge against four men responsible for killing his girlfriend during a revenge killing back in 1998. Revenge killing, you ask? Yeah, that's where all the history comes in. I don't want to give away too much of my story yet since it's in the early plot development stages, but here are things that will be included:

1. Tumultuous love affair
2. Farming potatoes (no, it will not be uber stereotypical)
3. Guinness
4. "The Troubles"
5. Familial ties/ Irish blood ties

Our journey so far? Landed in Dublin yesterday at 7 am. Longest day ever. Walked around some of the city. Toured the Guinness Factory (I needed to do something that didn't require too much brain power). I did learn how to pour the "perfect pint." For anyone interested, it's a whole big process that's taken really seriously. Yeah, you better tilt that glass at 45 degrees! (My husband fumbled his...lol) Today we're in Derry, N. I. We're here for three full days. This is one of the places that was a hotbed of unrest during the Troubles. And history I'm including in my book series. I'll explain the whole war between Catholics and Protestants tonight, but for now, we're off to learn about the Siege of Derry and Bloody Sunday.

Stay tuned for pics and a little history lesson later. xo
Posted by S. Walden at 5:48 AM 1 comment:

Leaving on a Jet Plane

Tomorrow's the big day! I'm leaving for a two-week research trip to Ireland. I was lucky enough to visit Ireland for a month as an undergrad 12 years ago! (I conducted an independent study of the life and works of W. B. Yeats.) I'm so excited to be returning to do more work. Yes, work. :) Fun work. And this project's HUGE--a three-part series set primarily in Co. Sligo, Dublin, and Derry, N.I. I'll post a synopsis of the storyline in the next few days to give you a better idea of my research before I start posting pics and info about my journey. Check in.

For All the Authors Out There

My friend Stephanie who heads up Romance Addict Book Blog (check it out!) is currently building her portfolio for web design and book covers. She's offering to design a limited number of websites and book covers for authors at a VERY LOW PRICE in order to build her portfolio. This is an amazing opportunity for authors looking for quality work at an affordable price. If you're interested, please contact her at romance.addict@att.net with the subject: "Portfolio help!"
Posted by S. Walden at 9:06 AM 1 comment:

I just checked the date of my last blog entry. Yeah....

I'm sorry :( There's no excuse to be away for so long, but I'm learning how to juggle social networking and writing at the same time. Obviously I suck at it. But I hope you haven't forgotten about me. I was thinking of you the whole time I was writing and revising for you. And thank God. It's finished. The first book, anyway.

I can officially say that GOOD will debut Tuesday, August 27th. It's the first book in the Too Good series that follows a student and teacher who fall in love. I took a chance with this one. The story takes place in high school. The MCs are ten years apart in age. It's not your typical student/teacher sexy sexy love story. I mean, don't get me wrong. It's sexy :) But it's also realistic. You'll cringe. You'll laugh out loud. You'll feel embarrassed. You'll get frustrated. At least. I hope you'll experience all these things. Really I just want to completely screw with your moral code :) Society stigmatizes student/teacher relationships (and for the most part for good reason), but what about the exceptions? Are there any exceptions? That's what I explored in GOOD.

1. GOING UNDER Birthday Bash Tour (August 19-23). Who's birthday? Well, mine, but I'll be the one handing out presents :) Lots of little giveaways with multiple winners, so make sure you follow the tour. I'll post the tour schedule closer to the start.

2. Official unveiling of my BRAND NEW KICKASS WEBSITE! Wednesday, August 21st (my birthday he he). I cannot tell you how awesome this website is. It is so cool, so trendy, so pink, so fun. Oh, I'm in love with it. I'd marry it if I could :)

3. Check this blog between July 23-August 8. I'll be in Ireland researching for my next three-part series. I'll be posting pics and information on the project while I'm away. Pics that include my husband...inspiration for Mark Connelly in GOOD. He doesn't know this yet, but he's about to be all over Google. Ha ha!

5. GOOD Release Day Book Blitz: August 27-29. Any blog interested in participating in promo can contact me at summer_walden@hotmail.com. Stephanie at Romance Addict Book Blog is organizing the promotional events and will have sign-up sheets available ASAP. I'll post the links on all my social networking sites as soon as she has them available. If you don't wanna wait, email me and I'll forward your info to her :) Thanks for your consideration <3

You all have been amazing and patient while I've been working on GOOD. Thank you so much. It's an honor to write for you, and I can't wait for the release of this book!
Posted by S. Walden at 12:59 PM 4 comments: