Wicked Book Weekend will be my FIRST ever signing, and I'm a mixture of excitement and nerves. If you're looking for an author event that's much more intimate than the big convention center signings, this is it! Think hanging out, not standing in line. Here's what I know so far... 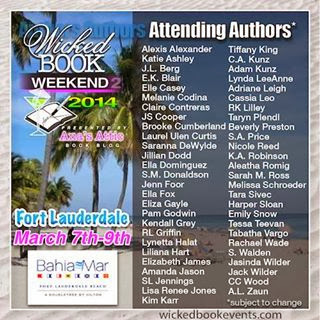 Friday, March 7th--Looks like there's a change for Friday. Bar hopping and pajama party. Boat ride leaving at 7 P.M. is what's currently scheduled. As far as I understand, it's inland, so there will be no waves. There will be a tour of some mansions and a bar :) I'm planning on taking the tour if I get into Ft. Lauderdale at a reasonable time. I don't know what time I'll be arriving in Ft. Lauderdale on Friday (I'm driving), so I'll probably skip the bar hopping. I will have my door open for the roving pajama party, though. Feel free to stop by and hang out. It also looks like the roving PJ party will be moved to Saturday night. Bring books if you want them signed. There will be a signing session on Saturday before, during, or after lunch (haha, not sure yet), but I'll sign books whenever. :)

Saturday, March 8th--Signing from 11:30 to 1:00. Buffet lunch will start after. You eat with the authors. If you still need a book signed, I'm more than happy to do it, but you may want to wait until after lunch so you don't have food stains on your pretty books. Buffet lunch/signing with the authors. Eat, gab, snatch some swag. The after party that evening will be super low key. Ana is setting up some fun activities including an erotic reading. Should be interesting ;) Also on schedule for the after party is light food, DJ, dancing, and cash bar. Your ticket does get you one free drink. Party from 8-12. And then I'm assuming the PJ party starts after. We're gonna be doing it up like a bunch of high school girls having a sleepover!

Sunday, March 9th--This will be a day for fans to just hang out and participate in various activities with authors. I think several authors are setting up fun stuff from glass bottom boat cruises to snorkeling to chilling by the pool with mimosas. I've got nothing planned at the moment, but poolside mimosas sound good. Events are being set up now. I should have more info for you in the next two weeks. As soon as I sign up for mine (it will most likely be drinks by the pool), I'll let you know where and when. <3

Basically, this is the ultimate girls' weekend. Awesome list of attending authors. You get one-on-one time with your faves. You don't want to miss this. Links are provided above for more information about the hotel and ticket prices. Come. It's gonna be tons of fun. xoxo

My advice? Have no expectations.

I want to share about a review I came across a while ago for Going Under where the reader was torn between giving the book four or five stars. She was torn because while (I assume) she enjoyed the writing (or what I would call the technical aspect of the work), she didn’t like the storyline. She admitted her confusion in the review as she had just previously read Good and loved it. And there you have it: She had just recently read Good and loved it.


Apples and oranges, anyone?


She, like many readers, had an idea of what to expect when she opened the pages of Going Under based on a previous work of mine. She expected something like Good. And it’s okay that she had certain expectations. That’s human nature to set a bar for subsequent works by an author we enjoy. It’s also human nature to expect the same thing from that author. Kind of like opening a can of Pringles. You expect that they will be every bit as delicious as that last can you opened. You can count on consistency. You can count on the same great taste.


Well, I’m here to tell you that you shouldn’t count on anything when it comes to my work. Why? Because every single story you read of mine will be different. Vastly different. Many of my early diehard Hoodie fans didn’t take to my second novel, Honeysuckle Love, at all. Why? Because the stories were on opposite sides of the spectrum, and fans were anticipating another Hoodie-esque work. Sorry to disappoint. After Going Under made its debut, there was a lot of pressure to produce another Going Under-type story. But I knew there was no way in hell I was writing another Going Under. That was a special book written at a specific point in my writing career. To try and duplicate it would have been disastrous, not to mention completely offensive to me and my readers. But nevertheless, that was the expectation. And I didn’t meet it.


I wrote a story about a heroine so very opposite of Brooke that one could be seen as the good angel on the right shoulder and the other as the bad angel on the left. The story also introduced themes and tropes that the indie book world doesn’t much like. You could say I swung all the way to the other side with the Too Good series, and I regret none of it. Here’s why: If I had to produce the same story over and over again, I’d most definitely put those stones in my pockets I talked about in an interview. I’d pull a Virginia Woolf in a heartbeat because writing for me is not about pigeon-holing myself in any one kind of genre or one type of story. That's boring to me, and I really don’t like to be bored. Moreover, one of the most liberating aspects of being an independent author is the ability and freedom to write whatever I want!


Incidentally, the reviewer settled on four stars. This was her way of reconciling her expectations of Going Under with what she actually got. I chuckle thinking about how she would react to Hoodie. For those of you who’ve read the book, you know what I’m talking about. And yes, as different as my stories are, I wrote them all. I am the same author who posed as an eighteen-year-old black boy from the ghetto, a self-absorbed justice-seeking eighteen-year-old girl, an impressionable and naïve seventeen-year-old who fucked her 28-year-old teacher, a poverty-stricken sixteen-year-old with social anxiety. All of them are me—my stories, my hard work—and they represent a growing library of works that are as different as the cultures of the world. Let’s see if I can keep going.


You just finished reading the Too Good series. And I can make this one promise to you: You can expect nothing like it with my next work.
Posted by S. Walden at 6:52 PM 7 comments:

I wanted to say "thank you" for all of the love and support you've shown me since the start of my writing career. It's been one year and four months since I published my first novel, Hoodie. Amazing things have happened in that time. I made a major list with Going Under. I met a ton of wonderful readers and book bloggers. I landed an agent. I put some book signings on my calendar. I pissed a lot of people off with my Too Good series. But I made a lot of people happy with it, too ;)

It's been one hell of a ride. And I can't wait for the next turn. Don't bail on me, though, once you discover what my next book is about. Just pull the seat belt tighter. And don't worry. I always said I'd take care of you, and I mean it. So happy Christmas. Enjoy some cheap books. xoxo