And since we've been talking about LoveLines, how about a description of the book?

And that’s just the first few minutes of her work day.

Thirty-one-year-old proofreader Bailey Mitchell is a slave to her tics. She inherited Obsessive Compulsive Disorder from her father, and it’s done nothing but inhibit her love life. She’s run the gamut of boyfriends—none of them willing or able to cope with her condition.

Enter 32-year-old Reece Powell, her new coworker at Beach Elite Marketing Firm. He’s more than willing to cope. He finds her habits cute and quirky . . . for now. Reece wins her over, and life coasts along for them until Bailey experiences a devastating blow. Tragedy exacerbates her OCD, and Reece realizes her tics aren’t so cute and quirky anymore. Just like all the others, he has the choice to leave.

Head on over to my author FB page for a fun giveaway. Two lucky winners will receive an exclusive first look at my upcoming novel, LoveLines. Good luck!

www.facebook.com/swaldenauthor
Posted by S. Walden at 8:49 AM No comments:

This is a teeny tiny teaser for you. Reece runs into Bailey at the movies. They're both without dates, so they decide to watch the movie together.


The lights dimmed, and they walked carefully up the side steps to two open seats in the corner of the nosebleed section.

“Great,” Bailey whispered as they settled in. “This is where people sit to make out.”

Her mouth dropped open. He thought he’d gone too far, and for a split second wished he could take it back. But then he realized he didn’t need to take anything back. She was smiling at him. Sharing in his joke. And her wink suggested the possibility of a kiss. That was if he stayed on his best behavior.

Something very naughty is about to happen in this theater, Reece thought, and he bit into a nacho to divert his attention.

I wish I had the snazzy tools on my laptop to create book art. But I don't. My website designer does, though, and I can't thank him enough for putting together my teaser campaign for LoveLines. Mad props to Ryan at Foi Designs. He's making me look all professional ;) 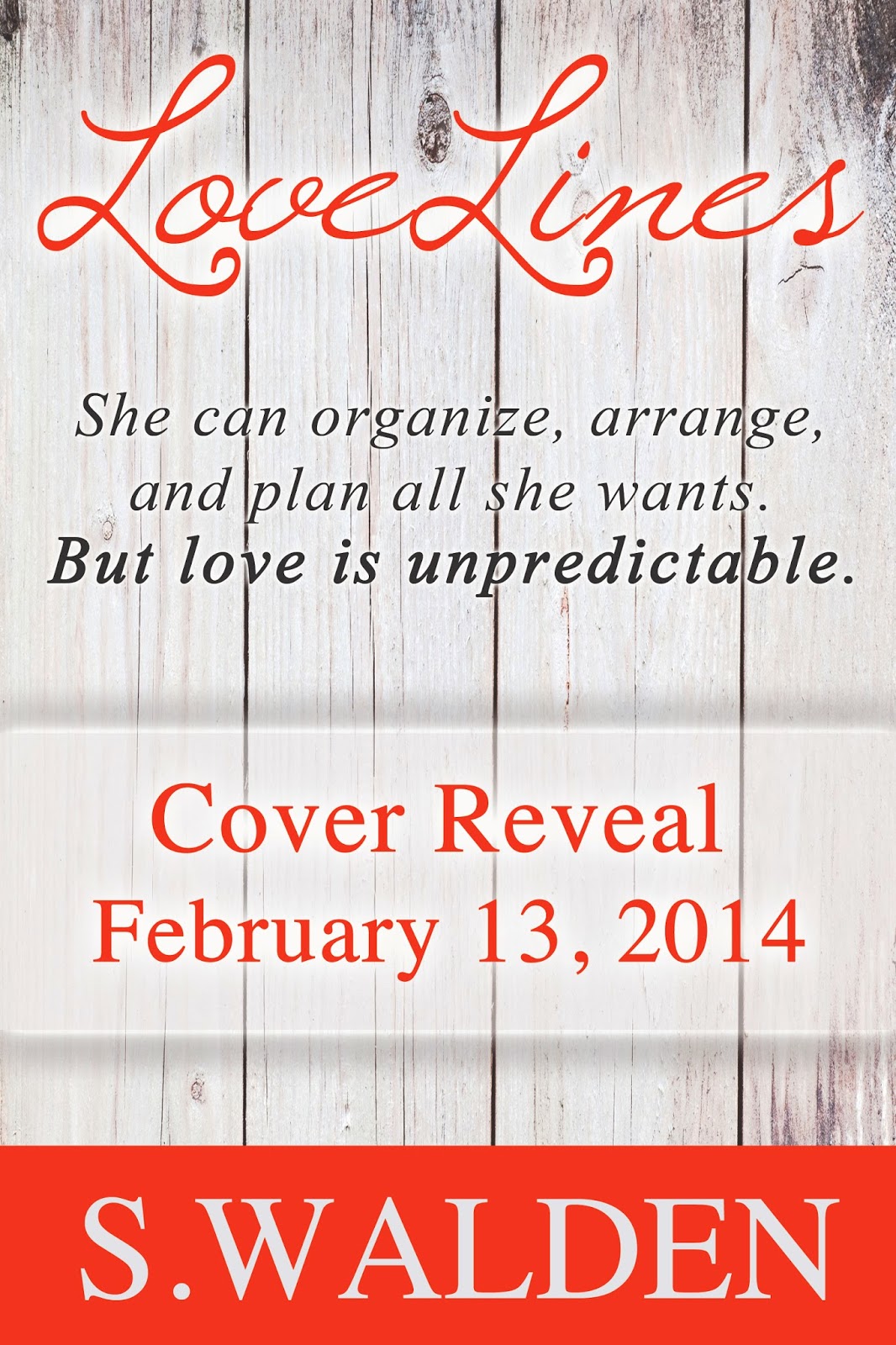 Well, my characters and I, that is.

I'm happy to share that LoveLines, my first adult contemporary romance, will be released Tuesday, March 25, 2014! You'll get the full book description on February 13--the official cover reveal--but here's a little info for you:

Bailey Mitchell is our heroine. Reece Powell, our hero. Bailey has a moderate-to-severe case of OCD. Reece finds that kind of hot (yes, hot). They work together, so a romance is definitely out of the question.....*snickers*. Set in Wilmington, NC (Go Seahawks!), this story can be read as a stand-alone, though it is the first in a 5-part series. Each book features new heroes and heroines who are all linked somehow in this small coastal community.

And now to tease you even further (just a bit). A snippet of my book cover :)

I'm excited for you all to meet Bailey and Reece. I've fallen in love with them, and I hope you will as well! I think you'll find their love story sweet, funny, and sexy with just the right amount of drama.
Posted by S. Walden at 8:14 AM No comments:

I recently watched 21 Jump Street (the movie) and laughed my butt off. Normally I’m not into the crass ones, but for some reason, this movie hit all my funny spots. Anyway, there’s a scene in the movie where a high school kid explains his dating style to an undercover cop, and at the end asks, “Cha feel?” Naturally I had to look it up on Urban Dictionary because I wouldn’t believe that teens are actually saying this. Sure enough, there it was: “Cha Feel?” Translation: “You feel me?”

Wow. Just wow. If I had any doubts about shelving the high school reads for a while, that phrase annihilated them. I love my teen stories. I do. I love the teens I developed. But I can't keep up with this teen talk. So it’s time for my stories to grow up. I need adults. With adult brains. I need to place them in adult situations and force them to make adult decisions. Does this mean my days of writing teens are over? Hell no. Just temporarily suspended.


I also realized that in addition to writing about teenagers, I included some pretty heavy topics in their stories. I came to be known as the controversial writer—the author who goes for the taboo. I don’t mind the label, but I worry about the day I release my first non-taboo story, especially since it’s my next one.


I love taboo. I love stories that push the boundaries. I may even have a never-ending supply of them. The problem is that they’re a bitch to write. They’re emotionally draining. Demanding. And I can’t write stories like that all the time. My heart and mind need a break every once in a while, just as you need a break from reading those angst-filled stories from time to time. So I made a decision to take a break from teen angst. I’d already developed the storyline for my last teen book, but I discovered I was having a problem actually writing it. My mojo wasn’t there. Something felt off about it. And that’s when I finally discovered that it wasn’t the book itself; it was me. I was simply tired. Tired of being in the dark, if you will.


So I’m stepping into the light with my next book. It sounds nothing like the books I’ve previously written. It’s not taboo. It’s not controversial. It doesn’t involve teenagers. It’s, well, opposite. That’s the best way to put it: opposite. And I hope this doesn’t disappoint my hardcore fans who expect taboo from me. You see, I plan to make this one very long, very satisfying writing career, and with it will come a variety of books, genres, themes, tropes. It’s good to diversify, try new things, stretch my skills. But know that my books will always be me. That won't change. I may just have you laughing more in this next one.