This novel would not be true to the style of S. Walden if it did not contain some dark and difficult moments. Events that cause anxiety can be especially hard for individuals who suffer from Obsessive-Compulsive Disorder . . . It is obvious to me that the author thoroughly researched OCD and combined the knowledge she learned with her ability to write a beautiful story. ~ Robin (Hesperia Loves Books) 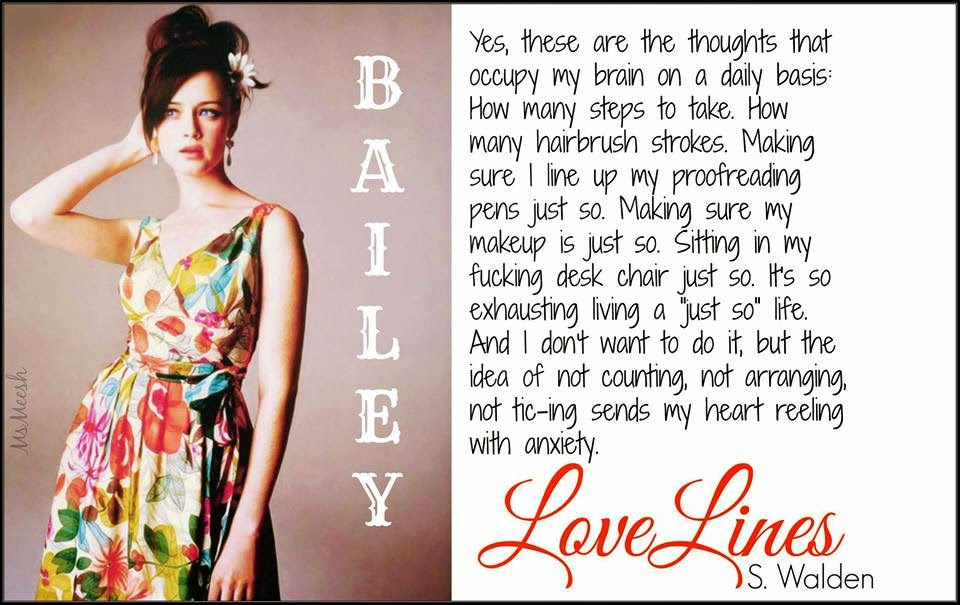 (art by Michelle @ Give Me Books)

I suffer from anxiety. Not the same thing as Obsessive-Compulsive Disorder (though the two are BFFs), but it’s a mental condition that can be quite debilitating. So when I created the idea for LoveLines—knowing I wanted to write a story about a heroine who suffers from OCD—I knew I wouldn’t take it lightly. “It” being the actual condition. I wouldn’t disrespect it. I knew I’d probably end up teaching readers a thing or two, because from what I discovered through research, OCD is nothing like our society portrays it in movies, on television, even in books! I thought I understood it before cracking open those journals. Um, no.

First off, let's be real. Tics can be funny. If you’ve ever read “A Plague of Tics” from David Sedaris’s Naked, you know what I’m talking about. You probably laughed so hard you peed yourself and never admitted it to anyone. So yeah, the quirks can be cute and funny. Reece, my hero, sees them that way. But that’s before he really “sees” Bailey’s OCD—how it affects every aspect of her life. Controls her. Inhibits her. Forces her to live a life with “clearly defined lines.” It is . . . debilitating.

Could I write an entire story with that somber tone? Hell no! And anyway, let’s face it: some tics lend themselves to humor. And Bailey can see the humor. She makes fun of herself. Her self-deprecation is probably her cutest characteristic. But understand that her creator took a lot of time to learn just how OCD works and how loved ones of OCD sufferers should help them manage their condition. Unfortunately, there’s not a ton of research out there. Doctors still don’t know why a person is OCD (they think it’s a different wiring in the brain), but there are treatments to manage the condition. Not cure it. Manage it.

Here’s the most important thing I learned: people who suffer from OCD do not take pleasure in performing their tics. In fact, they loathe themselves for submitting to their urges. Why can’t they just refrain from tapping that pen like we can? Well, here’s the second most important thing I learned: they believe that something disastrous will happen to them or their loved ones if they do not perform their tics. Makes no sense to us, but it makes total sense to them. They don’t want to invite heartache or loss. It’s easier to tap the pen.

You will see this all throughout LoveLines. Yes, you’re gonna laugh. A lot. Yes, you’re gonna think Reece is a weirdo. No, I didn’t say Bailey. I said Reece. You’re gonna experience some sickly sweet moments and tough moments that demonstrate Bailey’s condition. Front and center. And hopefully when you reach the conclusion, you’ll have a better understanding of a mental illness that’s been misrepresented or ignored. 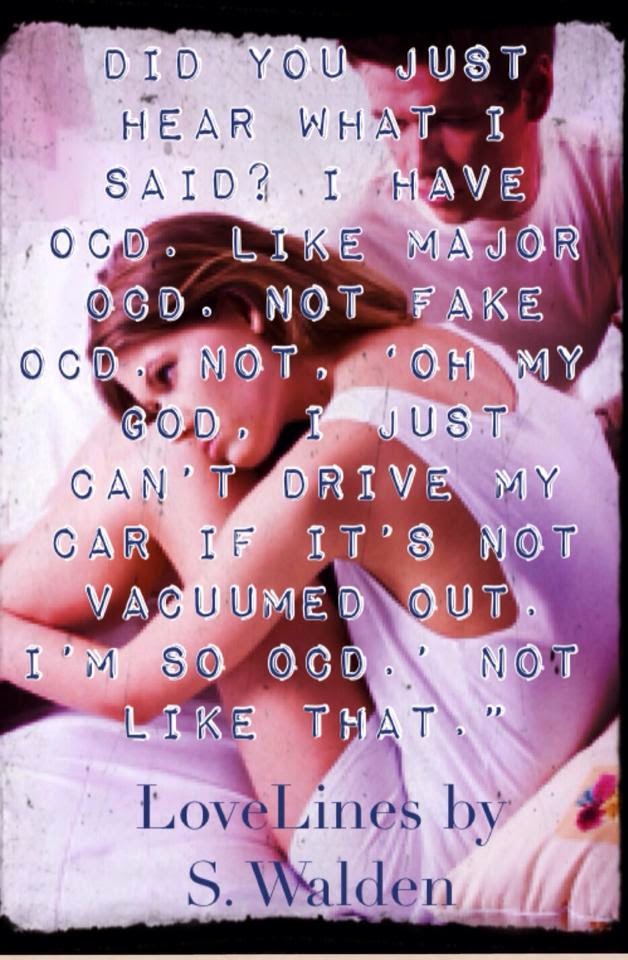 Come join me at the LoveLines Release Week Party!! Games, giveaways, prizes, and one HUGE contest all week long!

Get To Know This Blog: Nicely Phrased Book Blog

Today I’m featuring Nicely Phrased Book Blog—a blog that appreciates nicely phrased books J You know what I’m talking about: writing technique and literary devices. Adrienne and Emma—a mother/daughter team—go beyond discussing the storylines of novels. They like to dig deep into the meat of books, pull out the subtle nuances and layers often lacking in contemporary literature. It’s really fun to talk with Adrienne about those aspects of books because it’s not often I get to have conversations like that. Takes me back to college writing courses where developing the storyline was just one factor in writing. Emphasis on skill, technique, and purpose were equally, if not more, important. Here’s an example of our convos:

Me: People are having a hard time with Cadence’s name. They want to call her Candace.
Adrienne: I know.
Me: That’s tough for me because I named her “Cadence” for a reason.
Adrienne: Oh, I know.
Me: You do?
Adrienne: Uh, yeah. “Cadence” means rhythmic. Obviously music is an important part of your book. It makes sense that the girl Mark falls in love with has a name that represents a vital part of his life. Duh, Summer.
Me: Oh my God! You get it!!!

So how did Adrienne and Emma’s blog get started? Well, they wanted a place to post honest reviews of books and to help authors hone their craft. Everything about the conception and execution of their blog was carefully crafted. They didn’t throw up a site in a day and start reviewing. Nope. They took their time (several months!) to develop a catchy blog name, a structurally beautiful site, and a plan of action. The plan? Review books honestly. They focus on the following genres: YA including horror, paranormal, fantasy, dystopian, and romance; NA; contemporary romance; women’s fiction; adult paranormal; some adult fantasy; and some erotica.

Take a moment to visit their site and check out their reviews. So worth your time. And join me tonight from 7 pm-10 pm EST when I take over their Facebook page! I've got more teasers for you from LoveLines and two flash giveaways I think you'll like! Support these ladies who support indie lit <3

"Bailey, if you think I wanna fix you, you’re dead wrong. I don’t even wanna help you manage this thing you’ve got going on. I’m only doing it because I know it’s the right thing to do, but I’d much rather you go tic-ing all over my heart and brain." ~ Reece 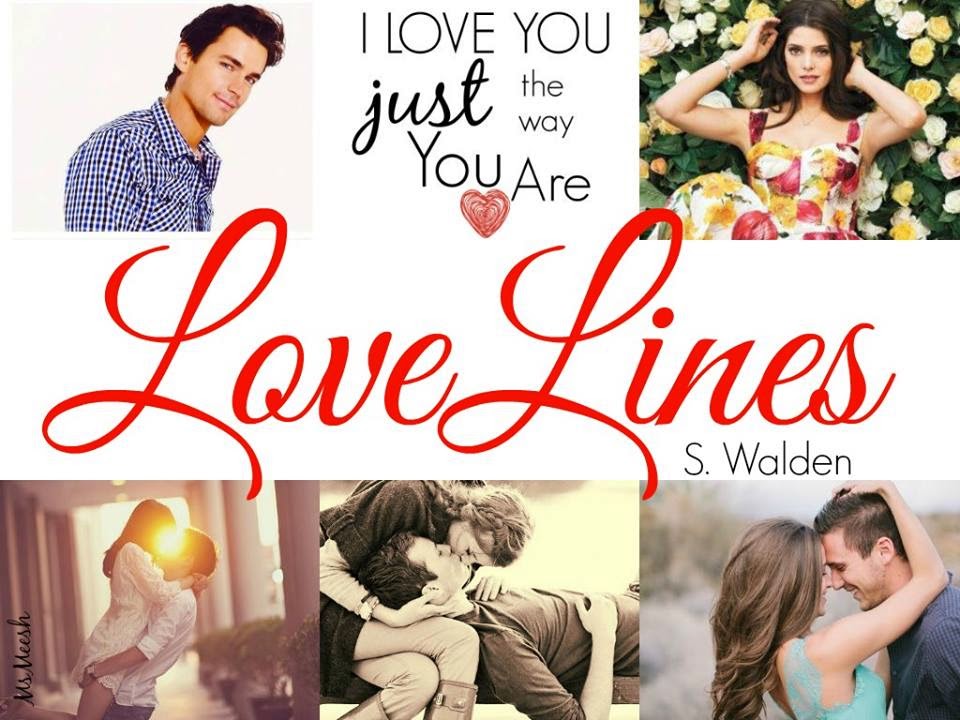 (Book art by Michelle at Give Me Books)

Get To Know This Blog: Southern Belle Book Blog

Today I'm featuring Southern Belle Book Blog run by Erin, Jamie, and Katie. I'll also be taking over their Facebook page this evening from 7 pm-10 pm EST. You don't wanna miss it! I'll share my Wicked Book Weekend signing experience (first one!), host a flash giveaway for a WBW signed keepsake booklet (Yep, all the authors signed it), and share some teasers from LoveLines, releasing March 25. Be there.

So here's the story of how Southern Belle Book Blog got started: Erin wanted a dedicated place where she could scream at the top of her lungs about the books she was reading and loving, but she was unsure about starting a blog. People, if you don't know, running a blog is HARD work. It can be intimidating, too, especially when you're first starting out. So Erin brought on her long-time friend, Jamie, and joined with Mackable Book Babes to learn the ropes. After a month with Mackable, Erin and Jamie felt ready to branch off and start their own blog.

Enter Katie, who they met through Mackable and who started out as their Facebook girl, growing their presence in the book world and finding new followers interested in the types of books the girls read and review. So what do they read and review? Mostly indie romance and New Adult. I like that. I'm indie. I'm romance. I used to be New Adult ;)

Take a moment to check out their blog. It's really pretty. They'll keep you updated on all the newest releases, and if you're a fan of romance, then theris is a must-follow blog!
Posted by S. Walden at 9:19 AM No comments: